"the ocean, nature, and the universe define the basis of my artwork" 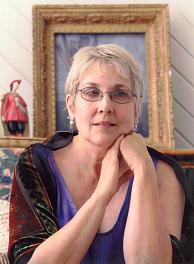 "I am interested in painting reality. The rhythm of an apple, the color of the city, the structure of an atom. I want to reveal the mysteries of and the many layers of reality contained in the ordinary.."

Raised in Charlotte, North Carolina, Caroline moved to Dallas, Texas in 1970. She now maintains a loft studio in the home. A brief residence in California was the beginning of her love of the ocean, nature, and color. Always living in a landlocked city has only added to this desire. She tries to spend as much time as possible by the ocean.

" It seems so much more alive to be by the ocean rather than on city cement and by the freeways. I need that feeling of life that only nature provides. Art has the ability to intensify and enhance reality. Art is teaching me to perceive the art in the ordinary."

Art became important to Caroline at an early age but it was not the focus of her formal college education. She earned a degree in General Studies (Psychology and Business) at the University of Texas at Dallas in 1981. Graduate classes have been added over the years.

The following list provides a sampling of the art instruction she has received from university level instructors and from other talented local and nationally known artists.

In 2002, Caroline was awarded a grant for a month’s residence at the world renowned Vermont Studio Center.

Caroline has exhibited her art in various shows, exhibits, and auctions. The following condensed list covers the period from the mid 80s to the present.

Carolines first teaching experiences (pottery and batik) occurred at local Dallas area recreation centers. In the period from 1997 - 2000, Caroline began teaching drawing, pastel, and color theory classes at the Craft Guild in Dallas. At this time, Caroline also began teaching yearly workshops, in various media, at the Mendocino Art Center in California. Caroline has also demonstrated batik at the Dallas Museum of Fine Art and pastels at various local art organizations. Currently, Caroline is providing private lessons at her studio.

Caroline is a past president of the Pastel Society of the Southwest. In addition, Caroline has had her artwork appear in the Better Homes & Gardens and American Artist publications.